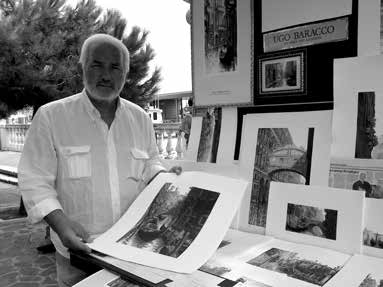 We live in an age of rapid photo and digital reproduction; the skill now needed to produce an image is cultivated by those on the cutting edge of technology. Quite frankly, their magic is beyond most people’s understanding; however, we benefit from it. But what about our ancestors? Were they not also the beneficiaries of those with superior technical skills? Quite frankly, they were. In ages past, people admired the images produced by artists who used direct methods, such as a brush loaded with paint on a variety of surfaces. Then, half a millenium ago, those on the cutting edge of technology produced the printing press. Artists responded, and so was born the art of the print.

Ugo Baracco is among a handful of masters who, in this digital age, still use the techniques developed by the masters of a by-gone age. His art follows the precepts of such Renaissance masters as Martin Schongauer, Albrecht Durer and Marcantonio Raimondi. More specifically, his interest in the technique called aquatint was shared by Francesco Goya, Mary Cassat, Joan Miró, Henry de Toulouse Lautrec, Edgar Degas and Pablo Picasso.

Ugo Baracco’s theme is the ancient city of Venice, founded centuries before the invention of the printing press, the mainspring of printmaking. In times to come, his record of Venice will be regarded as a monument to this city, just as Giovanni Battista Piranesi’s engravings of Rome are today regarded as being the definitive delineations of the Eternal City.